Home » Blog » Announcements » Vote for the World You Want to See 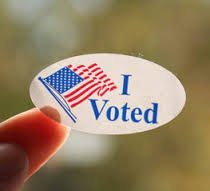 Tuesday, November 4 is Election Day. Your vote is your voice as a citizen. We encourage you to speak up during this election season to vote for the world you want to see. Despite modest gains to North Carolina’s labor market, poverty and stagnant wages are still major concerns during the current economic recovery. High rates of hardship among residents persist because of the state’s ongoing job shortage and rapid acceleration of low-wage work that fails to provide a pathway to the middle class. Recent legislative decisions that have disproportionately affected the working class include:

This election season, we encourage you to vote for policymakers who are finding innovative ways of stretching limited resources to confront poverty. We need stronger pathways between low-income residents and economic opportunities. To learn more about individuals running for political office, visit NC Voter Guide to view candidate profiles. Goodwill holds a bipartisan commitment to our workforce. We value ongoing engagement with our elected officials and our community to keep them informed about the value of job training programs and other community resources that help unemployed people in our region. What issues are important to you this election season?

As a college student, Josh was looking for a job to help pay the bills, and found a nearby Goodwill …