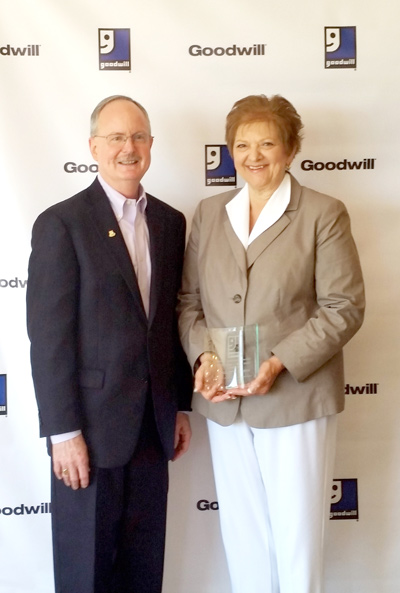 CHARLOTTE, N.C. (June 25, 2015) – An executive at a local Goodwill agency has received one of the nonprofit organization’s highest national honors. For her commitment to Goodwill’s mission and exemplifying the values of its founder, Paulette Griffin, Senior Vice President of Career Services, has been awarded the 2015 Edgar J. Helms Award for Staff from Goodwill Industries International. During an exemplary 27-year career, Griffin has helped develop and oversee the employment and training services for Goodwill Industries of the Southern Piedmont, based in Charlotte, N.C. and serving individuals in 18 counties in North and South Carolina. Now, Griffin is the chief architect of a new service delivery model that focuses on long-term support and family sustaining employment for the people Goodwill serves. During Griffin’s tenure, she and her team have served more than 150,000 individuals with multiple barriers to employment and have placed 28,000 people into competitive employment. She also leads several significant partnerships, including a service contract with the Department of Social Services. Other Goodwill agencies and workforce organizations across the country often seek the input of Griffin and her staff, who are always happy to share new concepts and service approaches. “Paulette is a role model for everyone who works in employment and training because she’s committed to a whole-person and whole-family approach,” said Jim Gibbons, President & CEO of Goodwill Industries International. “She embodies the values of Goodwill’s founder, Rev. Helms, who developed innovative programs to assist people in reaching their potential.” Griffin was selected as the recipient of the award from among 165 Goodwill agencies in the United States and Canada. She received her award on Sunday, June 21, 2015 in San Diego, CA. Cintas® proudly sponsors the 2015 Edgar J. Helms Award for Staff. About the Edgar J. Helms Award for Staff The Edgar J. Helms Award for Staff honors a current Goodwill employee who has not received Goodwill services in the past and who exemplifies the mission of Goodwill Industries and its founder Rev. Edgar J. Helms’ values of providing assistance and service to people with disabilities or other disadvantaging conditions. About Goodwill Industries of the Southern Piedmont Goodwill has been serving individuals and families in the Southern Piedmont region of North and South Carolina for 50 years. Goodwill operates 22 retail stores and has more than 50 donation sites in the region. Proceeds from the sale of donated goods fund job training and employment services for individuals facing barriers to employment such as lack of skills, experience or education. In 2014, Goodwill Industries of the Southern Piedmont provided employment services to more than 13,000 individuals. For more information, visit www.goodwillsp.org. Media Contact: Molly Thompson | Public Relations & Social Media Manager | Goodwill Industries of the Southern Piedmont | Office: (704) 332-0262 | Email: molly.thompson@goodwillsp.org Facebook: GoodwillSP | Twitter: @GoodwillSP | Instagram: @GoodwillSP