CHARLOTTE, NC (May 21, 2015 ) – Goodwill Industries of the Southern Piedmont announced at its annual Cornerstone Celebration today the naming of the new Goodwill Opportunity Campus facility. With a generous contribution from The Leon Levine Foundation, the facility will be named the Leon Le vine Opportunity Center. Leon Levine and his wife Sandra were present during the announcement this afternoon and spoke briefly about their decision to invest in one of the most comprehensive job readiness facilities in North and South Carolina .

The Goodwill Opportunity Campus (GOC) is a new 160,000 square foot campus on 18 – acres of land located off of Wilkinson Boulevard in Charlotte . The facility will provide a comprehensive collection of resources and opportunities for job training, job placement and job creation for individuals facing multiple barriers to employment. Construction began in early 2015 , with occupancy in the new building anticipated to occur in mid – 2016. “

Although we support many human service organizations, this grant is one of the largest we’ve made in support of this sector,” said Leon Levine, founder and chairman emeritus of Family Dollar Stores, Inc. “I’m impressed with Goodwill’s strong leadership and track record of putting people to work …My hope is that the L eon Levine Opportunity Center will be a place where hardworking people can find paths to a job, as well as access to other services that will help them take care of themselves and their families.”

Making the Goodwill Opportunity Campus a reality require s an investment of $20 million. Goodwill committed $12 million of its own funds , and in 2013 embarked on a capital campaign to raise $8 million from the community. To date, $5.2 million has been raised, including a $1.2 million grant challenge from T he Leon Levine Foundation, with only $2.8 million left to reach the goal.

“I congratulate Goodwill on this campaign’s success today, and hope you will join me in helping them achieve the rest,” said Levine.

A longstanding and recognized philanthropist, Leon Levine continues a legacy of giving in the community through the Goodwill grant challenge. As 2009 winner s of Goodwill’s Jack Callaghan Award, presented to individuals who have demonstrated a commitment to assisting those facing barriers to employment, Leon and Sandra Levine value the Goodwill nonprofit model of funding job training and employment services through revenue generated from its retail stores and other businesses . Founded in 1980, The Leon Levine Foundation supports efforts committed to compassion and improving the human condition, which lies at the core of Goodwill’s mission.

“Goodwill Industries is a special place that attracts so many special people and organizations,” said Elder . “ The leadership gift from Leon and Sandra Levine will give Goodwill the capacity to elevate the lives of so many. ”

At the heart of its mission, The Leon Levine Foundation is dedicated to organizations in healthcare, education, Jewish identity and human services, including helping motivated individuals and families attain self – sufficiency through sustainable income. The Goodwill Opportunity Campus and the Leon Levine Opportunity Center will provide a centralized location for coordinated services , which will allow Goodwill and its strategic partners to meet clients’ basic needs, expand the organization’s job resource center and offer increased access to career coaching. The facility will also help Goodwill expand its services to provide long – term support for clients to help them continue to develop so they can earn a wage to support their families and remain self – sufficient.

Another highlight of Goodwill’s annual Cornerstone Celebration, emceed by WCNC – TV longtime weather anchor Larry Sprinkle , spotlighted the organization’s 50th anniversary in the region, and also recognized the accomplishments of three Goodwill clients who are pursuing careers in human services, design and pharmacy. “

To Cassandra, Rohan and Nadia , we applaud your determination and celebrate with you the significant achievements you have made in your personal and professional lives,” said Elder.

The Good Work! Awards are presented to individuals who have received or are currently receiving service s , and have overcome significant barriers, achieved and maintained employment, and more . ( See below for expanded biographies with background information and headshots of each award winner).

About Goodwill Industries of the Southern Piedmont

Goodwill has been serving individuals and families in the Southern Piedmont region of North and South Carolina for 50 years. Goodwill operates 22 retail stores and has more than 50 donation sites in the region. Proceeds from the sale of donated goods fund job training and employment services for individuals facing barriers to employment such as lack of skills, experience or education. In 2014, Goodwill Industries of the Southern Piedmont provided employment services to more than 13,000 individuals. For more information, visit www.goodwillsp.org .

About The Leon Levine Foundation

The Leon Levine Foundation is an independent private foundation dedicated to improving the human condition in the areas of education, health care, Jewish identity and human services . 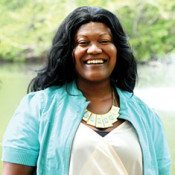 Cassandra Rolle first came to Goodwill in 2011, homeless and with a small child, in need of a job. She enrolled in the Banking & Customer Service training class through the Goodwill Job Connection on Freedom Drive. She attended the class for two weeks before determining that she needed immediate employment. Cassandra’s career counselor at Goodwill referred her to GoodWork Staffing, where she was placed in several temporary positions, including the Mecklenburg County Department of Child Support Enforcement and the Mecklenburg County Department of Social Services in the Community Resources division. Although she made quite the impression, there were no long – term opportunities available, and Cassandra returned to GoodWork Staffing. In July 2013, she was placed on a temp – to – hire assignment with the Mecklenburg County Health Department as a patient administrative assistant. Three months later in October 2013, Cassandra was hired as a full – time Mecklenburg County employee with all the benefits afforded to such staff.

Rohan Brown first heard about Goodwill during a trip to donate plasma for extra cash. He came to the Goodwill Job Connection on Freedom Drive, where he met with a career counselor and enrolled in the construction training course. After successfully completing the seven – week class, Rohan earned his forklift and National Center for Construction Education & Research (NCCER) certifications, and began working in a transition job on a housing project with Goodwill and Habitat for Humanity. When the project ended, Rohan returned to the Goodwill Job Connection in search of further employment. He was referred to GoodWork Staffing and in 2012, Rohan was placed at Anita Goodesign, an embroidery design company. Rohan began working at Anita Goodesign on a temporary basis, packaging marketing software materials. However, he quickly exceeded and doubled the daily quota of 1,000 CDs per day, impressing his supervisors with a productivity of more than 2,000 packaged each day. His hard work captured the attention of the company’s owners, Steve and Aundrea Wilson, who said that Rohan was “diligent and always had a smile on his face.” After working at Anita Goodesign for a little more than five months on a temporary basis, Rohan was hired on full – time. Interested in drawing, he inquired about the embroidery designs and was given the chance to learn the art of embroidery. He took full advantage of this opportunity and moved into a machine operator position. After learning various threads, embroidery fabrics and styles, Rohan was promoted to digitizer, where he thrives today as one of only three trained in the position, including the CEO. In only two years, Rohan Brown worked his way from a temporary employee to a valued member of the Anita Goodesign team. His full – time, salaried employment includes health benefits and a 401K, recognizing the development to his fullest potential through family sustaining employment. In his honor, Anita Goodesign recently released a new pattern, aptly named “Rohan’s Roses.”

Nadia Patterson came to the Goodwill Job Connection in Gastonia, N.C. in August 2013 in search of employment. She had moved from New York with her three children, but lacked a high school diploma or GED. Goodwill staff referred Nadia to a GED class beginning in October offer ed through the Gaston County Literacy Program, and s he signed up the very same day. After attending class every day and improving her outlook on her situation, Nadia proudly received her GED two months later in December 2013. Following this accomplishment , she continued to visit the Goodwill Job Connection in search of employment. Nadia decided that she was not finished with her education and wanted to do more. With the support of Goodwill staff, she enrolled in Kaplan College while working as a personal c are aide at night. Despite many hard days, Nadia graduated in December 2014 with a Registered Medical Assistant diploma. One month later in January 2015, Nadia obtained full – time employment as a Pharmacy Technician at Walmart Pharmacy in Gastonia. In Mar ch 2015, Nadia was named the Customer Service Champion of the Month.

Hello Everyone, On Tuesday, Mecklenburg County issued a Stay At Home Order effective Thursday, March 26 at 8 a.m. for …

Hello everyone, Every day is bringing new information, and we are working very hard to maintain operations and services, as …