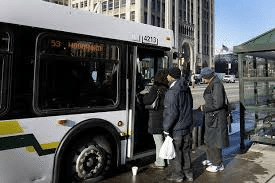 Getting a job and getting to a job are not the same thing. James Bryant learned that lesson the hard way when he spent two years searching for a job after being laid off from his manufacturing job. “I applied to literally hundreds of places, but since I don’t have a car and have to rely on public transportation, it really limits what I can do,” said the Construction Skills Training graduate. While James’ story has a happy ending, other people who lack cars aren’t so fortunate. Nearly 40 million working-age people now live in parts of major American metropolitan areas that lack public transportation, according to an analysis by the Brookings Institution’s Metropolitan Policy Program. A study that looked at transit and jobs in metropolitan America ranked Charlotte 75th out of 100 metro areas for transit accessibility. The study found that less than half of working-age Charlotte residents live near a transit stop. Discouragingly, the typical Charlottean can reach about 30 percent of jobs in their metropolitan area via public transit in 90 minutes. Goodwill’s benefit bank advisor Samoan Bowden says that she has heard the concerns of many low-income, minority residents in Charlotte who rely on public transportation to get around town. What’s more, many of the jobs are located more than 10 miles outside of downtowns. Only about one in five metropolitan jobs is located near the urban core, within three miles of downtown. Like many other large metro areas, Charlotte has patterns of residential segregation among its residents. Several tracts in the center of Charlotte (downtown area) show over 75% minority population, while the white population is over 75% in the suburbs to the north and the south. Faced with these challenges, policymakers have promoted many strategies to enhance job accessibility. Transportation-related responses aim to provide better transit so workers can get to more locations more often. The development of the light rail line in Charlotte has boosted accessibility to jobs located along its corridor. A new light rail line extending to University City is planned to open in 2017, connecting carless workers to a robust job market area. The University City area is the second largest employment center in Charlotte, with some 73,000 workers, and regional offices of 23 Fortune 500 companies. Urban reinvestment strategies seek to bring jobs closer to inner-city workers. Housing mobility programs strive to expand opportunities for lower-income residents to live close to jobs, often in suburbs. Strong transit makes it possible to reduce car ownership and all the expenses that go along with it, from purchase cost to maintenance to gas to insurance. Goodwill supports the adoption of an integrated, “all-of-the-above” approach to workforce development, which includes building strategies to address discrepancies in transit coverage. Goodwill sells discounted bus passes at its Career Development Center (2122 Freedom Drive) every Friday from 10:00-11:30 AM. If you use public transportation, follow these tips to avoid pitfalls in your job search and career.

What would you do to improve Charlotte’s transit resources?

Goodwill is hosting our 2nd Annual Bridal Pop-Up Sale on Saturday, March 7! We caught up with Taylor Pfeiffer, who …